The other night my friend, that I don’t get together with too often because he is so negative about life, got a fortune cookie message that he interpreted as negative. It was something like – keep your expectations reasonable. He was devastated. In his mind, it validated all those negative things he said day in and day out, including how he shouldn’t hope to fall in love because he’s just not worthy of love. I guess that expectation is reasonable to him. It’s clear to me that the fortune cookie message is not the issue, but according to him, it is a stamp of approval for his crappy life. 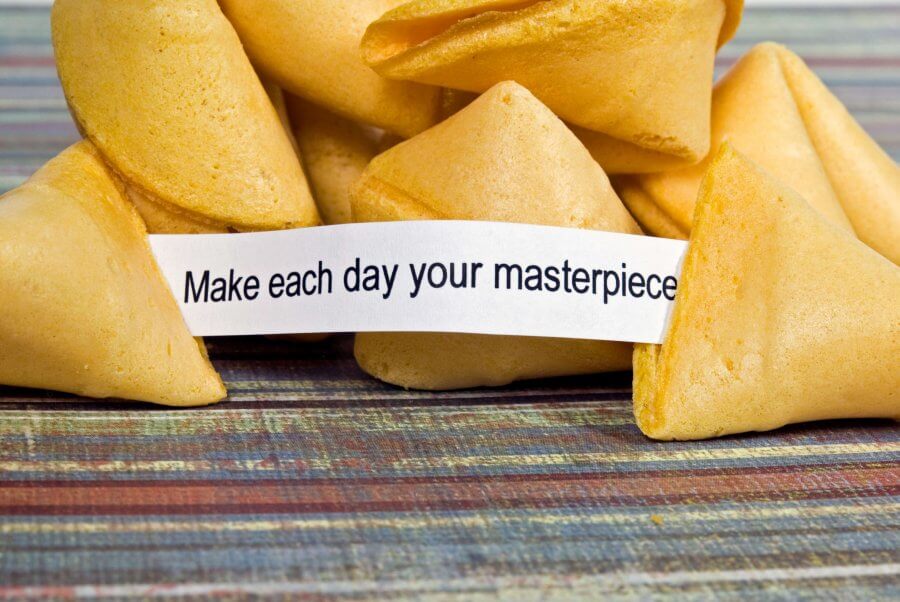 The problem is that this friend has always let all kinds of message like this dictate how he governs himself day by day. He doesn’t use negative signs, comments, or messages in a positive way, which is what I tend to do (you know, learn from your mistakes and improve yourself kind of thing) – instead, he takes any negative message straight to heart and allows it to dictate how he feels about himself and what action he takes.

I’ve known this guy for over 25 years, and things haven’t changed for him one bit.

It’s important to note that this guy’s life really does suck. He works at a job he hates. His health, both physical and mental, is very poor. He has lost most of his friends and his family doesn’t like him. And he is perpetually single.

He’s not classically good-looking, but he doesn’t scare kids when he comes around the corner. He’s just an average looking guy who thinks VERY little of himself and his future – and always has.

He, like all of us, was picked on a bit in junior and high school, but other than that, he was not brainwashed by his parents, teachers, peers, and everyone else that he was worthless and incapable of being interesting to women.

But, he has taken every negative message he’s heard and received to heart and let it dictate how he feels about himself and what he does.

And I’m talking about every message, including.

My Friend Reminds Me Of Many Commenters On This Blog (Or Is It The Other Way Around?)

Sometimes running a blog like this feels very hopeless. I’m trying to promote self-improvement, increased confidence, positive attitudes and outlooks, and a happier life, but a large percentage of guys who are single, lonely, and feeling down on themselves, are not willing to hear positive messages.

Instead, so many guys on here say things like the following:

There is nothing I would like more than just being myself. But my real self is not attractive to women, unfortunately. I just don’t have a sexy personality. They almost always like me and we can talk away for hours but that is as far as it goes. I am a friend, not a lover. If I actually want to have sex with women I have to lie and create the bullshit persona that turns them on. That is just the bitter reality.

The bitter reality! That’s it. That’s the message this particular person received and THAT’S THE WAY IT IS! Instead of focusing on changing things up, he keeps going forward believing the ‘fortune cookie’ messages he pulls from different events and people.

He says that women almost always like him (I think he’s choosing to ignore that fact that could actually help him out), but after they talk for hours, it doesn’t go anywhere. So, maybe he needs to change what he talks about. From the message he left, I get the impression that he might be a little bit negative, talk about negative things, and turn off women – because who wants to get with a negative guy?

He’s a friend, not a lover. I bet that makes him feel very confident when he talks to women, right? Not! He likely sends off the message of not being enough for a woman and women are receptive to that message. Ok, they think, you’re not enough for me, I can sense that. I think I’ll look for someone who is enough for me.

I could go on and on about his comment, but the fact is that he sees a message that he’s not enough, and he’s making it a reality day in and day out.

Make Your Own Tomorrow Different Than Today

My advice for anyone who is taking all the messages, signs, and events to heart in a negative way? Stop taking the messages you get from fortune cookies, signs, people, comments, feedback, criticism, and women, and making them who you are with no wiggle room out.

Even if you get a clear cut message that things are going wrong, you can always move forward in a positive way.

It happens every day. People are changing the ‘reality’ of their life and finding out that they are capable of much more happiness, love, and respect than they are getting right now. I see it in people who are willing to take the negative message and find a way to use it to improve their life.

Hell, I’ve done it! Every sign pointed towards the fact that I was never going to find someone who wasn’t selfish and abusive, and instead of letting myself get stuck in a life of misery with selfish and abusive partners, I demanded more out of my life. I admitted that I was worth more and then I took action in my life to get more, and now I’m in the most loving relationship I’ve ever seen.

What I Think Negative Signs And Messages Mean

I’ve come to believe that negative signs or messages mean that we need to alter our lives. They are a sign that we are headed towards a place that we don’t want to head and that something needs to be changed in order to get on a new path.

This belief has helped me have a better life in my career, relationships, love life, and overall happiness.

I’ve had tons of friends and family members who adopted this belief and started taking action on something more positive – something that they wanted to believe about themselves and their life. And what a difference it makes!

First Step: Be Open To The Positive Message Inside Or Beyond The Fortune Cookie

I tried telling all this to my friend after he complained about his fortune cookie.

I tried telling him that the message in the fortune cookie – or anywhere else for that matter – did not need to dictate how he moved forward.

I tried telling him that ‘reasonable expectations’ for one person could be completely different for someone else as it all boiled down to perspective, and maybe he could expect things for himself that didn’t involve doom and gloom.

He responded with, “This is just the way it is. Everyone, everything…even the universe is against me. I can’t change that so I need to just accept the way it is.”

So, you see, without being open to a positive message behind a seemingly negative message, his tomorrow will be the same as it is today. So, even though fortune cookies don’t have to dictate your tomorrow, his fortune cookie did.

Below is a list of research studies that are currently open for participation. … END_OF_DOCUMENT_TOKEN_TO_BE_REPLACED