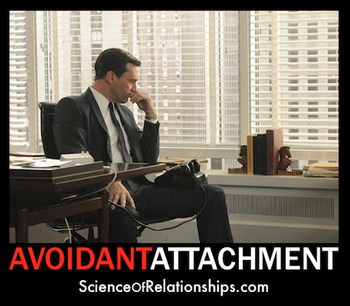 “The reason you haven’t felt it is because it doesn’t exist. What you call love was invented by guys like me, to sell nylons. You’re born alone and you die alone and this world just drops a bunch of rules on top of you to make you forget those facts.” – Don Draper

In the spirit of the upcoming Mad Men Season Five premiere, I thought it might be fun to do a character sketch of Don Draper, the show’s most central and intriguing character. Don’s creative genius can’t be denied – he outperforms everyone in the 60’s advertising world with his sheer wit and charm. However, Don does not enjoy the same level of success in his personal life. In previous posts, we have discussed how examining a person’s attachment style can help us to better understand their patterns in relationships. Don is an excellent example of an avoidantly attached person: someone who relies on only himself, who pushes other people away, and who tries to avoid intimacy wherever possible. Below are some telltale signs that Don is avoidant.

1) He had an awful childhood

Parental attachments in childhood are important for forming attachments later in life. Unfortunately, Don’s childhood was particularly damaging, with no supportive parental figures to turn to. His biological mother died in childbirth, his father was an abusive drunk, and his stepmother bitterly referred to him as a “whore child”. This pattern of absent or cruel caregivers is associated with the avoidant attachment style:1,2  The lack of love and support that Don experienced as a child likely taught him that he can’t really depend on anyone but himself.

2) He confides in almost no one

Throughout the show, Don remains a mysterious figure – everything about him, right down to his true identity, is concealed from almost everyone. Always stingy with personal information, Don rarely allows anyone to learn more about him than they need to know: his colleagues know nothing of his home life, his family knows nothing of his work life, and nobody knows anything about his past. Many of his strangest behaviors actually work to keep other people at arm’s length, such as his random blowups at his employee Peggy, his dismissiveness of his first wife Betty, and his tumultuous interactions with his colleague Roger. For a secure person, sharing one’s doubts and insecurities with others can be a great way to gain closeness and support. But for an avoidant person, exposing one’s vulnerabilities to others is thought of simply as a way to make one more vulnerable to being hurt.3

Avoidant individuals do not like to face problems head-on. Acknowledging one’s own distress might lead to desiring comfort and support from others, which is something that avoidant individuals really try to, well, avoid. So instead of talking a problem out with a friend or trying to find solutions to it, avoidants are more likely to immerse themselves in an unrelated activity such as drinking. As such, avoidant people are more at risk of substance abuse.2 Indeed, when Don faces a lot of personal stress in Season 4, he begins to battle alcohol addiction, which involves multiple blackout periods and even missing commitments with his kids.

Given that Don is not a big fan of intimacy, it makes sense that he prefers to keep his romantic relationships on the shallow side. As one of his angry exes put it, “You only like the beginnings of things.” Those beginning stages of relationships are comfortable – he can put on his well-rehearsed charm – but once things start to get more intimate, he gets a bit squicked out. Thus, many of his flings end within a few months. These shorter, less committed relationships are very typical of avoidant individuals.4,5 Notably, at the end of Season 4, Don proposes to Megan…a woman he barely knows, of course, just as he barely knew Betty when he proposed to her.

It will be very interesting to see what happens in Season 5 as Don and Megan get to know each other better. On the one hand, Megan is portrayed as a very warm and caring person, and such validating individuals can sometimes bring out the best in avoidants.6 On the other hand, she is likely to want intimacy and closeness from Don, which is something that avoidants tend to have a very difficult time providing for their partners. We will just have to stay tuned to see if Don’s attachment style will get the better of him, or if he will succeed in cultivating a strong and healthy attachment to his new fiancée.

4Shaver, P. R., & Brennan, K. A. (1992). Attachment styles and the “Big Five” personality traits: Their connections to each other and with romantic relationship outcomes. Personality and Social Psychology Bulletin, 18, 536-545.

Samantha Joel – Science of Relationships articles
Samantha’s research examines how people make decisions about their romantic relationships. For example, what sort of factors do people take into consideration when they try to decide whether to pursue a potential date, invest in a new relationship, or break up with a romantic partner?