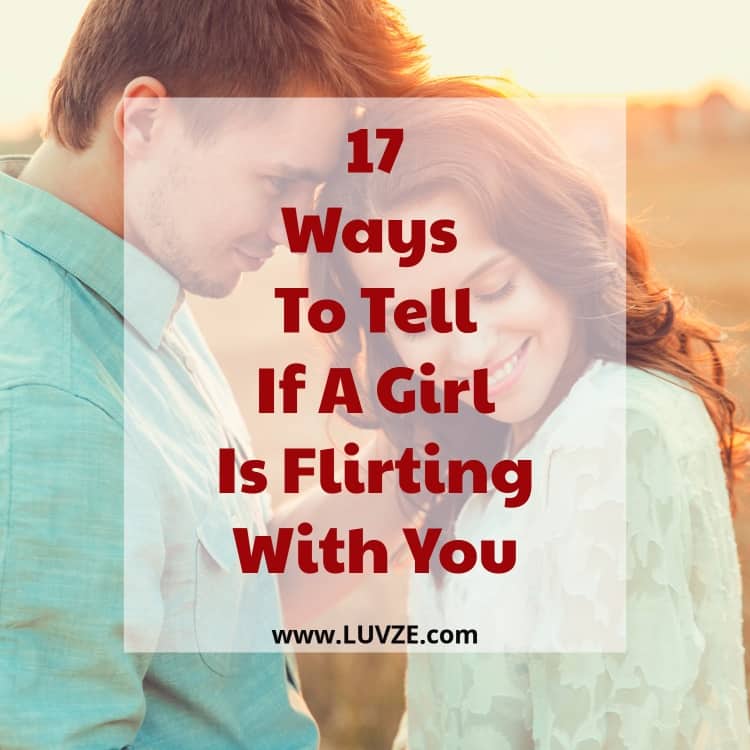 If you want to know what a woman really wants, you are going to have to invest some time figuring out her language.

Yes, women speak a different language of love when compared to a man’s version and the more you know, the better off you will be. Particularly, when you are looking to figure out whether or not a girl has the hots for you.

Here are experts tips and clear-cut signals she isn’t interested in you and on the flip side, some super hot signs this girl really enjoys flirting with you.

*Not looking at you at all

*Arms crossed rigidly across her chest

*Only one or two word replies

*Touching you too much – Means she just wants to be friends

*Leaning away from you

*Not contributing at all to the conversation

Now let’s take a peak at the invaluable information you need to know to figure out if a girl is flirting with you.

How To Tell If A Girl Is Flirting With You

Signal One – She’s Got Her Smile On

This move is one of the toughest to figure out because women smile for all different reasons. She might be nervous or shy, just trying to be friendly, or she might really trying to flirt with you.

A good rule of thumb to follow is if a girl smiles at you from a far and the smile is slow and deliberate minus the nerves, then she wants to connect with you. This means she’s flirting with you and you better take action and flirt back.

When a girl wants to flirt with a man or wants him to notice her, she is going to show him with her body language. So she might bashfully twirl her hair or maybe bat her eyelashes at you.

Touching her lips, chin and face are also proven body language signals that a girl likes you and is trying to flirt.

These are all feminine flirty signs a girl is trying to turn a man on.

Signal Three – Cleaning Herself Up

If a woman heads to the bathroom and comes back with her hair brushed, lip gloss on, and perhaps she’s wearing her shirt a little lower. These are all clear signs that a girl is flirting with you.

What you do with this information is of course up to you.

If a girl is looking for you to help her, she could very well be flirting with you.

For instance, if she happens to ask you to help her lift something heavy or maybe help her figure out something on her phone, she is seriously trying to get your attention.

All of which she is usually totally capable of handing on her own but she’s just looking to grab your attention. This is a straight in your face flirting technique.

Signal Five – Reaches Out And Touches You

If a girl reaches out to touch you when you’re talking, this is a ginormous sign she likes you. This is telling you that she is totally into you but doesn’t want to be too obvious about it just yet.

BEWARE – If she is constantly touching you and just doesn’t stop, that’s not good news for you. This means she is crazy comfy with you and just wants to be friends. So just be careful to pinpoint the difference between “flirting” and “just friends.”

This signal can be a little confusing so let me explain. If a cute girl is talking with you but alternates between facing you and twisting away from you, then she’s flirting. Girls like to be mysterious too.

This also helps a woman stay relaxed and calm. Pay attention to this one and make sure you interpret it accordingly.

If a girl is fidgeting around you and acting a little twitchy-jumpy, chances are pretty good she’s trying to flirt with you. Remember, not all girls are skilled flirters off the hop!

She might play with her hairband, twist her watch and maybe fiddle with her necklace. As long as she is making eye contact with you and not looking like she is so uncomfortable she wants to bolt, then she’s telling you with her body that she’s into you.

When a woman is obviously trying to get close to you, she’s flirting. If on the other hand she is repeatedly trying to move away from you, then she’s not looking to be anything more than friends.

A girl that likes a man is going to invade his private space as much as she safely can. This may even get a little claustrophobic for you but it’s all with good intention. She just wants you to pay attention and notice her that’s all.

Why is she doing this?

Well, most girls believe the guy should be making the first move so this is all she’s going to give you so that you will make your move.

If a girl is laughing at all your jokes, even the lame ones, then she’s trying to tell you she likes you. This one is a little hard to understand but when a girl likes a guy ,she is fascinated with him.

Don’t worry, it doesn’t last long. So you better take action fast if you like the idea of this girl flirting with you.

Signal Ten – Puts You On The Spot

When a girl flirts with a guy, she might signal this by asking you lots of questions about you. Don’t think of these questions as interrogation, just that she is genuinely interested in you.

And don’t forget to give her good answers because unlike most boys, she is paying attention. There may be a quiz of sorts at some point!

When I was growing up, the boys I liked were the ones that I playfully pushed or punched, I’m not kidding! Let’s take this to the adult level.

Loving and hating isn’t so far apart. This applies to insults and complimenting when you think about it.

If a girl is giving you compliments and taking stabs at you, she is probably flirting. Pay attention to this one or you just might miss out.

This one sends many boys running but when a girl starts talking about the future, what’s down the road, then she is flirting with you.

She might talk about a band that is coming to town next month that she wants to see or maybe a party in a few weeks that you might like to come to.

When a girl is flirting with a man, she wants him to know that she would like to see him more than in the now and when you talk about things down the road, you are sealing the deal.

It’s important for you to semi-commit to events down the road if you want the flirting to continue. Otherwise she will just shut the door and move on fast.

When a girl tries to validate herself to you with things she’s accomplished, she is playfully flirting with you. Essentially, she is trying to show you she has value and deserves your attention.

Some girls go overboard and actually start to brag. Keep it in a positive light and understand it’s just her way of flirting with you.

Too bad girls never seem to be straight up when it comes to flirting. They like to send off signals but none of them are concrete.

Experts say one of the easiest routes to figure out if a girl is flirting with you is to listen to how fast she is talking and the tone of her voice.

Girls seem to talk faster to the men they are interested in. So the next time you are with a group of girls, test the theory out.

On the flip side…

Often when a girl likes a guy, her pitch will start to rise. This is all happening subconsciously so don’t hold it against her please.

Let’s take this one a step deeper.

Body language is VIP when you are trying to figure out whether or not a girl likes you.

*Mimicking – If she is unconsciously following your movements, she is flirting. So when you cross your arms, scratch your head or yawn, pay attention to see if she follows suit.

Psychologists say people who like each other will try and mimic their behaviors. This one is derived from evolution and the need to find your place or fit in.

*Shoulders Pointed Toward You – When a girl is flirting with a man, she will keep her shoulders pointed in or toward him. This shows that she is trying to get your attention and she is paying attention to what you are saying and doing.

*Toes Pointed Toward You – If a girl is interested in a man, her feet will be pointed toward him. This is another unconscious move that people just do when they like someone.

Signal Sixteen – A Show Of The Hands

When you are talking with this girl, pay close attention to what her hands are doing. Her hands will tell you a lot about what she is thinking and feeling.

Pay Attention Please – If she is sitting on her hands, hiding them or sticking them in her pockets, she might be telling you she doesn’t want your attention.

Yes, it’s important that you pay attention to her body language, but you also need to listen to what she is saying.

If your conversation is easy, quick and smooth, seemingly effortless, then she’s into you.

On the flip side – If you happen to be the only one talking and she’s pretty much keeping to herself, with her mouth shut, then she might not be interested in you at all.

There are women that are just natural flirts with everyone and likely have no romantic interest in you whatsoever.

She is likely skilled in most everything we’ve talked about thus far, but just likes the thrill of the flirt.

Don’t get mixed up with this one or you will get shot down.

So how do you tell if she’s just a natural flirt?

Pay attention to how she is acting around everyone else. Is she giving all the signs and signals to every other man in the room? Does she skip around the room from one conversation to the next, making the rounds?

When you are trying to figure out whether or not a girl is flirting with you or genuinely not interested, it becomes sort of a puzzle.

You need to pay attention to the signals, the body language, words, and overall vibe.

And make sure you don’t get stuck on a natural flirter that just enjoys flirting for the sake of flirting and nothing more.

Open you mind to researching and learning everything you can about how to tell if a girl is flirting with you and you’ll soon become an expert in the field.

Best of luck…You’ll do great!