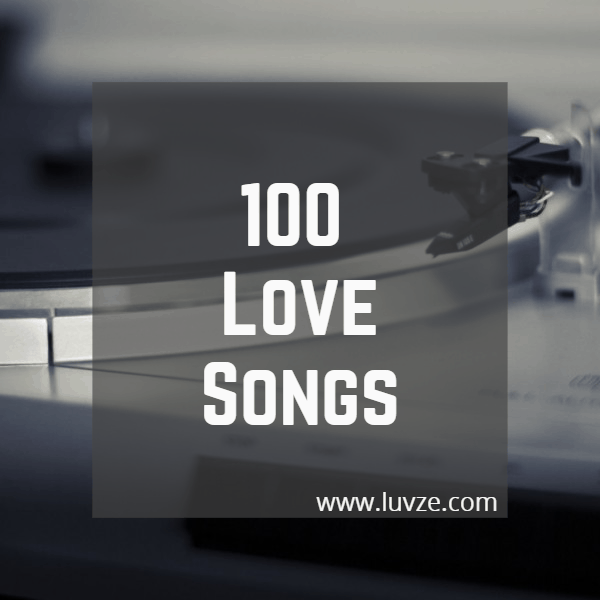 Love songs for him or her can be a great way to say “I love you”. Some would give gifts to express how they feel about someone. Others, on the other hand, say those three words through music. Music and love are related since music was first introduced.

During the earlier times, music and love coexisted in poems. Then, they started to be seen in songs of different genres. In the 60s, 70s and 80s, rock songs and pop songs were the major favorite categories among music lovers. These two genres spoke directly and indirectly about love in some form.

Love and music are inseparable. If you’re looking for a love song that truly expresses your love to that person, here’s our list of 100 amazing romantic songs that you can dedicate to your special love.

100 Romantic Love Songs for Him or Her

It reached number 4 in Billboard Hot 100. Love Song was a debut song of the singer from California, Sara. Unfortunately, it didn’t make it to number 1. The meaning of the song didn’t refer to a lover who wanted to hear Sara singing a love song. Instead, she was referring to a record label who told her to write a great love song to prove that she could indeed write a song. Still, it’s romantic, isn’t it?

It’s a song from Taylor’s album Fearless released in 2008. The song was written for her love interest, who wasn’t accepted by her family and friends. Her music video is related to Romeo and Juliet by William Shakespeare. Instead of having a tragic ending, she replaced it with a happy one. This is a nice song that you can dedicate to him.

3. I Will Always Love you by Whitney Houston

Although it was popularized by Whitney Houston, it was originally recorded by Dolly Parton in 1974. I Will Always Love You was a song for the movie the Bodyguard, Whitney’s film debut. Unlike Dolly’s version, Whitney’s version was undoubtedly a worldwide success. That’s probably because it was sung beautifully by the late Whitney Houston. The song is for those who still believe that love can stay forever, no matter what.

4. A Thousand years by Christina Perri

It’s from the soundtrack of The Twilight Saga: Breaking Dawn. Released in 2011, the song has magical lyrics that complemented the singer’s mesmerizing voice. It talks about the eternal love of Bella Swan and Edward Cullen.

5. I Love You Always Forever by Donna Lewis

During its release, it didn’t topple Macarena of Los Del Rios. That said, it only settled on number 2 at the Hot 100 of Billboard. Despite that, the lyrics of this song were great, especially this part: “I love you, always forever.”

6. All of Me by John Legend

It’s from the fourth album of John Legend. He co-wrote it with Toby Gad. Released in 2013, he dedicated this song to his wife Chrissy Teigen. The song and its lyrics are simply beautiful. It shows how John loves Chrissy. The song is about a person loving another person despite his/her imperfections. Listen to it and you’ll understand why it’s on our list.

7. At Last by Etta James

This is another romantic song and a true American classic. It has been on top of most radio charts in the US when it was released. The song was even reported to be part of many weddings a few years back.

It was originally recorded by The Cure. But Adele’s version was more beautiful. Just listen to “whenever I’m alone with you… you make me feel like I am home again” and you’ll understand why it’s included on our list.

9. I Just Called to Say I love by Stevie Wonder

It’s an ideal song to sing when you have a long distance relationship with your boyfriend. Stevie wrote it for the movie The Woman in Red. Because of the lovely composition, it became an Oscar Winner for Best Original Song. The song is about acknowledging the fact that when your loved one is not around, you’re lifeless.

The band wanted their fans to know that they perform their songs All for Love. There’s no way for someone to sing this song without doing a little move in honor of love.

11. You Had Me from Hello by Kenny Chesney

Although Kenny has written and sung a lot of sweet lyrics, this one is a real winner.

12. I’ll Never Break Your Heart by the Backstreet Boys

The band was once famous. But their popularity was solely based on their ability to make teenagers fall in love with them. Thus, it deserved to be on this list. Although it’s a song for women, you can still play it to your boyfriend who wants an assurance from you that you’ll never break his heart.

It’s a perfect song for your wedding. The lyrics convey what marriage should be – “keeping your faith when it’s gone… till the day my life is through, this I promise you.” It may be a cheesy song. But the lyrics are just magical.

Admit it. It’s still a lovely song, despite its age. It was magically arranged and composed allowing it to be covered many times. The song was also used to describe the relationship of Chandler and Janice on Friends. Who can’t fall in love with these lyrics — “My love, there’s only you in my life”

It’s on the album Parachutes. Recorded in 2000, the song was reportedly a reference to Chris Martin’s unrequited love for his partner. It’s a soothing music that you can play in the background while you’re having a dinner with your boyfriend. The line “For you, I’d bleed myself dry” always strikes a chord each time you listen to the song.

Sang by the husband and wife, Jay Z and Beyonce collaborated in this song and gave their fans an insight of their love life. Although it’s playful, it’s still romantic so it makes it on our list.

17. I’ve Had the Time of My Life by Jennifer Warnes and Bill Medley

You guess it right. It’s from the movie Dirty Dancing of the late Patrick Swayze. While listening to it, one can’t just help envision himself/herself as Jennifer Grey. The song perfectly describes what a realistic love is.

18. I Don’t Want to Miss a Thing by Aerosmith

Although Steven Tyler is known for writing and singing songs about sex, drugs and rock and roll. However, this song just changed the game of the band. It’s the theme song of Armageddon. The lyrics didn’t talk about the space excursion of the move, but about the extreme love between A.J Frost and Grace Stamper. If you’ve seen the movie, you’ll surely cry thinking about it.

19. The Power of Love by Celine Dion

It was a big hit in 1994. Each time it’s played, it reminds you that when facing trials, the power of love will help pull us through. This is a classy love song that can be played to celebrate your anniversaries.

It’s another hit in 1994. The lyrics are perfect as a wedding vow. Each word of this song is a promise that you spend a lifetime in making another person happy. It doesn’t matter if the song is played during a proposal, a wedding dance or honeymoon. The song is a sure tear jerker.

Released in 2013, the song was written by Mraz and Michael Natter. It’s a song about couples experiencing troubles in their relationship. It is also inspirational. It’s one of the best love songs that you can dance with your partner. It has a melodious tune and mushy lyrics. It simply has all the ingredient of a perfect love song.

Other Love Songs You May Enjoy

22. Without You by Mariah Carey

23. My Heart Will Go On by Celine Dion

24. Far Away by Nickelback

26. How Do I Live by Trisha Yearwood

27. Your Everything by Keith Urban

28. No Ordinary Love by Sade

29. I Want To Know What Love Is by Foreigner

32. Listen To Your Heart by Roxette

33. Simply The Best by Tina Turner

37. Could I Have This Kiss Forever by Whitney Houston ft. Enrique Iglesias

38. Holding Out For a Hero by Bonnie Tyler

39. Said I loved You…But I Lied by Michael Bolton

40. Please Forgive Me by Bryan Adams

41. I Would Do Anything For Love by Meat Loaf

43. You’re Still The One by Shania Twain

46. Un-Break My Heart by Toni Braxton

47. Here and Now by Luther Vandross

49. Nobody Wants To Be Lonely by Ricky Martin ft Christina Aguilera

51. Lovesong by The Cure

52. More Than Words by Extreme

53. I Will Remember You by Sarah Mclachlan

54. I’ll Stand By You by The Pretenders

56. Have You Ever Really Loved A Woman by Bryan Adams

58. What Is Love by Haddaway

61. I Belong To You by Eros Ramazzotti and Anastacia

62. Every Breath You Take – The Police

64. The Way You Make Me Feel by Michael Jackson

66. Your Love by The Outfield

70. Beast Of Burden by Rolling Stones

71. The Man Who Lives Forever by Lord Huron

72. U Smile by Justin Bieber

75. You Give Me Something by James Morrison

76. This Year’s Love by David Gray

77. Then by Brad Paisley

78. Love Me Tender by Elvis Presley

80. It’s Your Love by Tim McGraw and Faith Hill

81. You Are The Best Thing by Ray LaMontagne

82. Vision Of Love by Mariah Carey

83. Let’s Stay Together by Al Green

85. All You Need Is Love by The Beatles

86. You Got What I Need by Joshua Radin

90. Make You Feel My Love by Adele

91. Take My Breath Away by Berlin

93. Justify My Love by Madonna

94. It Must Have Been Love by Roxette

95. She Loves You by The Beatles

96. Woman In Love by Barbra Streisand

98. Because You Loved Me by Celine Dion

99. I Can’t Stop Loving You by Ray Charles

You may also like our article: Different Types Of Love.