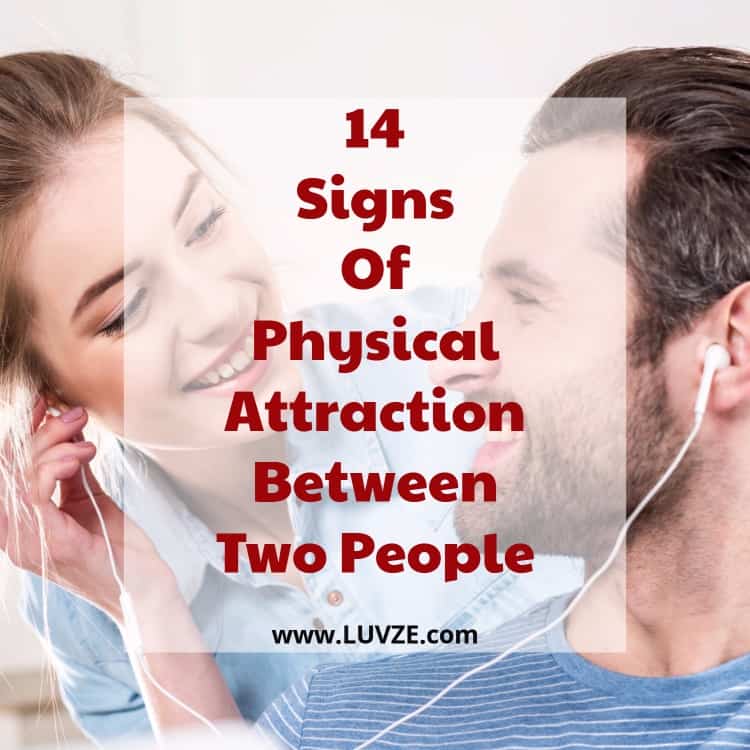 Even when words are not spoken between two people, there are still ways to figure out if they are physically attracted to one another. All it takes is a good eye, intuition, and an understanding of how people act when they feel that sense of attraction to another individual.

Can you say with confidence that you know how to read the signs of physical attraction between two individuals? Attempting to read a person for any signs of chemistry to someone can either be really easy or really hard depending on who the individual in question is.

Instead of missing out on possible opportunities, try and take the time to learn about the signs of chemistry between two people. Whether you are trying to figure out the signs that are being sent between you and another person or if you are trying to spot signs of unspoken attraction between two individuals that you happen to know, the tips below will help you to become more aware of what to look out for.

The most obvious sign of physical attraction between two people is touching. If you see these people touching each other, no matter how lightly, then there might be something there.

This can be something as subtle as touching on the arm, back, or shoulders, or something as obvious as embracing closely or kissing. If you see any of these signs, then it is pretty simple to detect if there is chemistry there.

Sometimes, though, the touching will be a little subtle and these people will find little excuses to touch each other. But if it happens pretty frequently and they do not touch other people around them this way, then you can almost be sure that there is some sort of physical attraction going on.

A smile can be a big hint that someone is feeling physical attraction towards the person that they are interacting with. Have you been noticing a special someone who manages to flash you a big smile every time you talk to them or have you been noticing two people who grin at each other every time they interact? That can definitely be a sign of a unspoken attraction as it means that seeing this person makes them happy.

Fidgeting and seeming nervous can also be a signs of a physical attraction. After all, it is perfectly normal to become nervous around someone that you might be physically attracted to since your attraction might make you feel self-conscious or insecure.

Does this person often adjust themselves, running their hand through their hair or fidgeting with their hands while talking to you, for instance? These are other possible signs that they could be atracted to you.

A big sign that someone might be attracted to you is if they make an effort to groom themselves in your presence, such as straightening a tie or fixing their hair. Actions like these could possibly be a sign that this person wants to look their very best for you. After all, who does not want to look their best for the person they are feeling attracted to?

What if you happen to catch this person licking their lips while they are looking at or talking to you? This could mean that this person is thinking about the chemistry they have for you. When we are attracted to people, we do particular things, both consciously and subconsciously.

Another example of a physical sign of attraction is if a person happens to point their feet towards you with their toes touching.

Another possible sign of chemistry between two people is the physical act of sweating. If someone seems to only get sweaty palms around you, then you might be making them feel a bit nervous, which might be causing them to sweat when they are in your presence.

Unusual shyness can be a possible sign of physical attraction as well, though it is not as much of a guarantee as some of the other signs mentioned here. At the same time, acting very assertive and confident can also be assign of attraction to you as well.

Trying To Make You Laugh

Does this person, you are wondering about, try to impress you? Do they go out of their way to make you smile and laugh? Those actions could be a sign of their attraction towards you.

It should also be noted that laughing releases endorphins, so of course you will feel good when laughing with someone, and sometimes you might even feel an attraction there.

Here is another interesting thing to note. Sometimes when we are attracted to someone, we lower our voices because that can be perceived as more attractive. Maybe it is our way of trying to sound more sensual, or more impressive, or maybe we just want to sound cool to the person we are physically attracted to.

Believe it or not, silence can also be an indicator of some physical attraction. Can the two people be comfortably silent together? Or is there an awkward energy instead? If the two people seem comfortable together, even in silence, then there could be attraction.

Copying What You Do

Another big sign of a person who is attracted to you is when they are a copycat. Go ahead and try to casually observe if this person has a tendency to mimic your various actions, from the subtle to the very noticeable.

It is their body’s way of trying to be like you because they physically want to be with you. They might not even realize they are doing it.

Most of us try to impress the people we are physically attracted to, whether or not we realize it. From showing off to trying to act charming, we often try to put on a good show for that special person. Or maybe, someone is doing this to you.

Some people who are physically attracted to you might lose all subtlety and they might even show off their muscles and flex for you. This is definitely a way to show off your physical attractiveness to someone else you might be drawn to.

People Who Are Already a Couple

Sometimes you might even want to look at signs of chemistry between two people who are already together. Not everyone who is in a relationship is necessarily compatible and sometimes relationships go through bumps in the road that can affect the physical attraction in the relationship.

Still in The Honeymoon Phase

One obvious thing for you to note is that if the two people who are a couple still act in love and are very demonstrative with one another, then the physical attraction is probably still there in the relationship.

This can be as obvious as holding hands or holding each other close to something as subtle as brushing dirt off of the other person’s shirt.

A couple who is on the outs on the other hand, will act distant and aloof from one another. There will be less physical touching. And they will face each other less than they would have if there was still a strong interest there.

When it comes to deciphering a situation for any signs of chemistry, it all depends on this particular person’s personality and how they show their attraction towards someone.

It is absolutely possible to occasionally misread the signs you see and that is why you need to be very observant of what that person does.

Figuring out if there is physical attraction between two people is arguably easier than deciphering if one person feels attraction for another individual.

This is because if there are chemistry and sparks flying between two people, then they will be clearly visible no matter how subtle it is. All you have to do is observe what is already in front of you.

So go ahead and take a careful, close look at the two people that you suspect of having a physical attraction to one another. It can also certainly help to know how they interact with other people.

If two people act flirty together but they are essentially like that to everyone else as well, then it will be harder to tell if these two people are actually attracted to each other or if they are just being friendly in a purely platonic way.

Now you know how to tell if there is any physical attraction between two people. Sometimes it is easy to spot when two people have an attraction to each other and other times, you need to be a lot more observant. Trying to figure this out can take a few seconds or a few days depending on how subtle or how obvious the clues are.