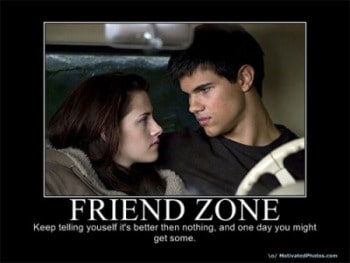 How many times do you think a guy sees a girl and thinks, “I bet we’d would really get along well. She’d be a great friend to hang out with and talk to?” That is, how often do guys start out wanting to be friends with a girl for purely non-sexual (i.e., platonic) reasons? If you suspect it doesn’t happen very often (if at all) then you’re right according to new research from the Journal of Social and Personal Relationships.

Researchers conducted a study in which college students came to the lab with an opposite-sex friend, and both of them answered questions about each other.1 Questions focused on their attraction to each other, their desire to date each other, and how much they thought the other was attracted to him (or her). Let’s take a look at what they found…

Okay, so guys find their female friends attractive, but females don’t exactly feel the same about their guy friends. That seems about right…and is consistent with media portrayals of these matters. For example, on Friends, Ross was more attracted to Rachel than Rachel was to Ross. Similarly, on Scrubs, JD was more interested in Elliot than Elliot was interested in JD. As the researchers explain, males have evolved an approach to relationships that seeks to maximize their chances for reproduction by having many partners, whereas females are more likely to try to focus their energy on partner quality rather than partner quantity.2 Interestingly, both males and females were more attracted to their friends when they thought their friends were more attracted to them. It just turns out that guys were a bit overconfident.

Finding 2: Males’ attraction to female friends isn’t changed by relationship status (theirs or hers).

Did you catch that last part? Women are pretty good at knowing when a guy friend wants to date them or not. So guys, if you are interested in her, she probably knows it. If she seems comfortable with the friendship arrangement, chances are that you are firmly entrenched in the “friend zone.” (Click here for Chris Rock’s take on this. Fair warning, this is NSFW due to language, unless you happen to work as a sailor.)

What the Results Mean For You

Well, if you are a female reader, do a quick inventory of your male friends. Those guys likely think you are attractive and want to date you. Have a boyfriend? No worries. Think it isn’t true? Remember that this study suggests that females underestimate their male friends’ interest. Guys, your female friends most likely just want to be friends. End of story.

Know someone living in the friend zone? Email them this article by clicking here.

Below is a list of research studies that are currently open for participation. … END_OF_DOCUMENT_TOKEN_TO_BE_REPLACED