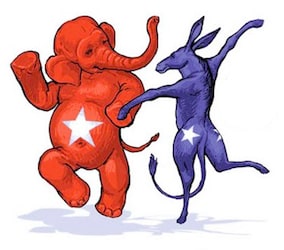 When looking for partners, we are attracted to others who are similar to us. Whether the similarity lies in personality, values, or political views, individuals tend to seek those with ideals comparable to their own. However, in a recent survey of college students, the majority indicated they’d be willing to date someone with a political affiliation different than their own.1 Yet this willingness may not result in stable relationships. In fact, relationships between partners who share political ideologies last more than twice as long when partners hold opposing ideologies (5.83 years vs. 2.30 years). When researchers asked heterosexual couples about their political values at the onset of their relationships and then again after 11 months, those who were still dating after 11 months had more similar political attitudes than those who had broken up.2 Perhaps as a result, research also finds that online daters are reluctant to reveal their political affiliation.3 Taken together, these studies suggest that people may be willing to date someone with different views, but they may also conceal their own political views to avoid scaring off a potential mate.

Perhaps not surprisingly, spouses tend to share political views. Although it is possible that spouses simply come to share each other’s views over time, research finds that spouses shared political views are the result of partners’ initial similarity in political views when they started dating.3 Not only do individuals tend to marry partners who share their political views, but these political similarities are one of the strongest qualities that spouses share, even more significant than education. If political affiliation is such a potent predictor of relationship success and longevity, when couple members differ in their political views it could signal that their relationship’s future is in doubt; there is a significant connection between differing political views and relationship stability.4 Experiencing divorce may also change political views. After divorce, men tend to favor the Democratic party less, whereas women’s views do not change.5 In addition, when researchers follow women longitudinally, women express more support for the Republican party after marriage, but more support for the Democratic party after divorce.  The researchers speculate that these changes are due to how marriage and divorce influence men and women’s financial situation.

Overall, my fellow countrymen and countrywomen, the state of our unions is strong (insert applause here), provided those unions are between two Democrats or two Republicans.

1Kofoed, E. (2009). The role of political affiliations and attraction in romantic relationships: Why can’t we all just get along? Advances in Communication Theory and Research (Volume 2).

Julianne (Jules) Nestor is in her junior year at Monmouth University with a Psychology major and Health Studies minor. She works with Dr. Gary Lewandowski on self-expansion and relationships. In the future, Jules would like to continue researching differences between heterosexual and LGBT relationships. She hopes to continue on to graduate school to earn her Psy.D. in clinical psychology.