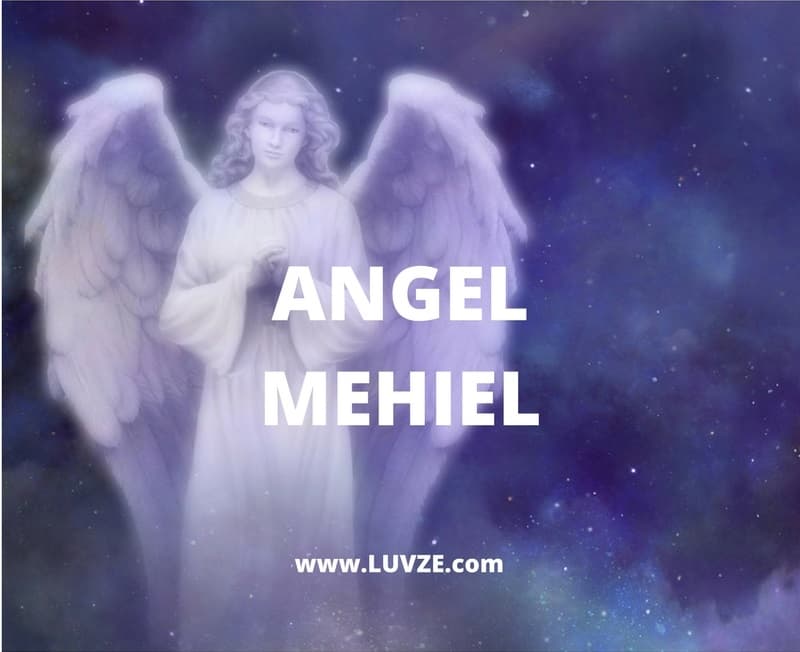 Guardian Angel Mehiel is the Angel of Inspiration, the 64th name of God, and with his name meaning “The Vivifying God”.  As a God who must bring vivid thought, color, and motivation to others, he is able to bring positive energy and light to his followers.  Those who pray to Mehiel may find themselves inspired, receptive, imaginative, and perhaps even innovative. Mehiel is the patron angel of vivication and inspiration, making this Angel the one to seeking guidance from when in need of ideas, artistic protection, technological ideas, and a life of production.

In the Jewish religion, Angel Mehiel is an Elohim and in the Christian religion he is under the Archangels.  In both Jewish and Christian beliefs, Mehiel is taught to be one who brings intelligent thought, understanding and logic to all things.  With this intelligence, he also brings creativity, the ability to think outside the box and invent new creations.  With new creations comes new ideas, innovations, and a pioneering spirit.

A Bible verse in the name of Mehiel reads: “Behold, the eye of the Lord is upon them that fear him, upon them that hope in his mercy”.  The interpretation of this verse could bring readers to understand their role in respecting and honoring their God.

With this understanding in place, those who follow are able to see hope and guidance from the faith in their God, which in turn allows for an open mind and faithful character.  With these basic functions in place, one can tap into their core creative abilities and use them towards writing, speaking, leading and inspiring.

Angel Mehiel – The Angel of Inspiration

Guardian Mehiel is believed to bring light to dark and is the antidote to all evil forces.  He is said to bring speaking and writing abilities to those with creative tendencies. Mehiel brings rationality to his follower and alleviates hyperactivity.  Part of the rationality taught to his follower is the guidance towards channeling their over activity to an honorable and worthwhile pursuit.  This is turn bring followers to lead a more productive life.

Mehiel is believed to bring help to those suffering from mental health complications or personality issues.  Those struggling with personality changes may find guidance from this Angel to be comforting. Mehiel is said to bring productive ideas, conducive to personality challenges to those seeking his protection.  He is able to guide followers to use their creative mind and ideas wisely, leading to a productive use of time and mental abilities.

Angel Mehiel is the Guardian Angel of those born on the days between February 5 and February 9.  Those born upon these days are said to have a high tolerance and level of understanding, strong intuition, artistic abilities and creative mindset.  Those with these faculties can solve problems creatively, bring out the good in people, and inspire others to improve their life’s progress.

Under the influence and protection of Mehiel one is thought to be enthusiastic, full of vitality and vigor, and lead a loving lifestyle.  Followers are thought to be full of love for themselves but also love for others.  With this love, followers show their need for love and to give love through kind acts, planning of meetings and parties and orchestrating family events, and areas in which to socialize and provide support to others.

Family is the most important factor in the life of those born under rule of this Guardian Angel.  He brings them love for family, imaginative ideas, and inspiration which bring his followers to be allies against dark evil.  With this strong need for love and family ties, followers may be naive and quick for betrayal.  With their trust and belief in love, under the rule of Mehiel, followers are susceptible to fraud and lies.