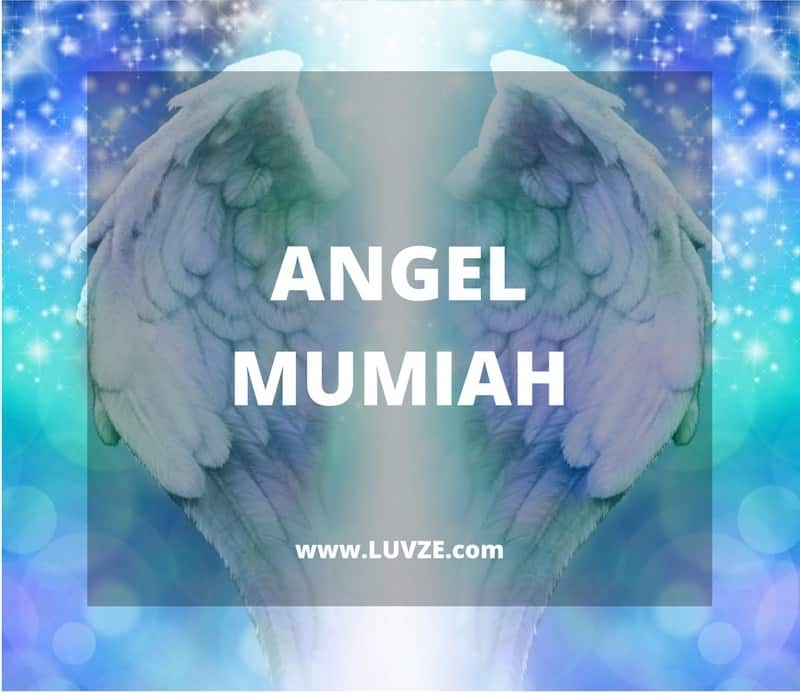 Guardian Angel Mumiah is the Angel of Rebirth, the 72nd name of God, and the meaning of his name said to be: “God the End of the Universe”.  With a name implying, he is the end of the universe. Mumiah must be one who is good with reinvention, rebirth, transformation, and eternal life.  To be at the end of a universe, means the rebirth would have to take place to prevent a termination.  When one reaches the end of a line, the end of a goal, or the end of the universe, one must decide quickly upon a new beginning or new path.

Angel Mumiah is a Cherubim in the Jewish religion and an Angel in the Christian religion. In both, Mumiah is a guide to psychics and those with strong intuitive capabilities. He brings out the abilities of reception and decision making in those seeking his guidance, thereby leading followers to truth and light.

He brings new thoughts, ideas, and processes along with his new beginnings.  Each new beginning may be seen as a rebirth in one area or another, ending one cycle and beginning another anew.

A Bible verse in the name of Mumiah reads: “Return into thy rest, O my soul.  For the Lord hath dealt bountifully with thee”.  This verse gives the reader an impression of him as one who bring rest, comfort and gratefulness to those who seek his guidance.

Mumiah brings the perception of positivity and optimism, bringing new thought and processes to those in need of a new view on life.  He may also renew one’s faith and bring about a new beginning within the church.  He can help those making big, important decisions reach their ultimate goal. Mumiah may also guide those finishing projects that seem to never end and consistently need a restart.

Angel Mumiah – The Angel of Rebirth

Guardian Mumiah is the Guardian Angel to seek when looking for information on reincarnation, rebirths, eternal life, and overall achievements. Mumiah brings his followers the knowledge of all as well as protection for those working against the natural order. He is a proponent of eternal life and will fight for those who believe the same.  He is also believed to aid those with depression and are hopeless through his guidance and insistence of eternal life and purpose.

Those who are grieving the loss of a loved one may find comfort in the teachings of this Angel.  He is with those who are suffering from grief, and guiding those in despair towards the faith in eternal life.  He is also able to help those experiencing ruin, financially, mentally, or physically.  Through his teachings of rebirth and eternal life, his guidance may inspire those in despair to find hope in their situation and regenerate their life.

Angel Mumiah is the Guardian Angel protecting those born between March 16 and March 20.  He is said to give those under his protection fresh ideas, inventive thinking, and knowledge of how to influence others.

With a new and fresh outlook on life, most are able to find new ways of living and incorporating faith.  With the ability to inspire, one is able to bring about motivation and love in others through their ideas and attractive nature.

Followers of Mumiah may be privy to amazing life stories.  Part of these life stories are due to one’s ample intuitive and inspirational nature, but may also derive from one’s love of work.

Bringing about a strong work ethic and inspiring others, can bring one to become a strong leader.  Leader with influence may also become wealthy and powerful but remain in good faith due to their spirituality.