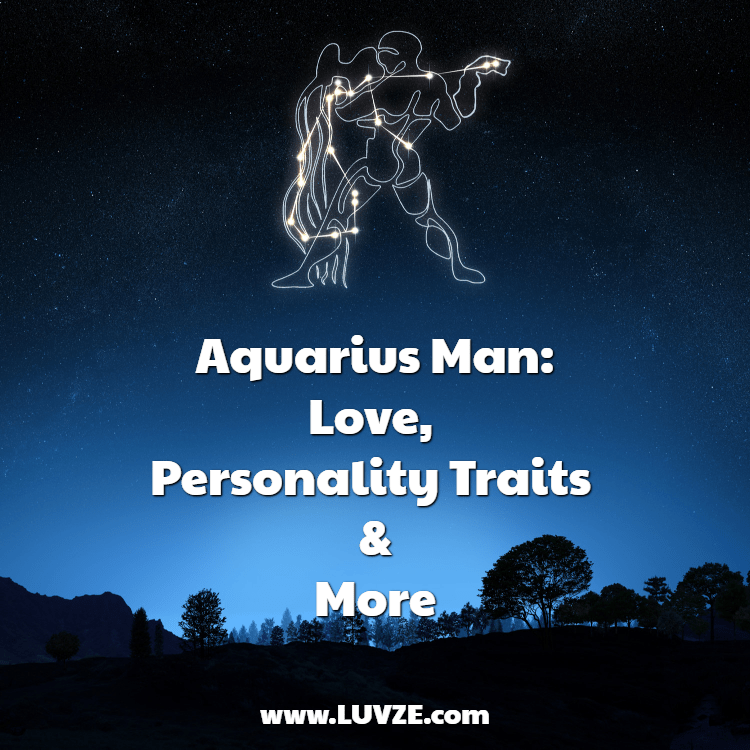 The Aquarius man is entrancing. He’s a visionary, and he can seem mystical and mysterious. This makes others inquisitive about him, but no one may ever truly understand this guy.

The male Aquarius is ahead of his time. His mind is often swimming with innovative ideas and radical concepts that are too elaborate for the average person to grasp. He’ll go through life seeking out like-minded people and form a strong connection when he finds a kindred spirit.

This is the rebel of the zodiac. He defies convention and keeps people guessing.

Who Really Knows The Aquarius Man?

As an Aquarius, this guy has an open, non-judgmental personality. He can chat with anyone. In school, he is apt to be quite popular. He shifts between different social groups and gets invited to all of the parties.

As an adult, he often runs into people he knows when he goes out. The bartender gives him free drinks, and the woman behind the deli counter doesn’t have to wait for him to order before handing him what he wants.

What this man really wants is for people to unearth his true nature. But he’s often confused about who he really is and what he genuinely desires. He needs friends and lovers who are patient enough to stick with him as the various layers become exposed.

His Mind Is His Sexiest Quality

This man is captivating, but it’s not because he’s especially confident, masculine or conventionally handsome. His mind envelops people in his mystique.

He makes people notice him because he defies convention. Some words that describe the Aquarius man include:

The Aquarian is extremely intellectual. He lives in his own head, coming up with innovative ideas and using his quirky sense of humor to charm people. Other people are likely to be attracted to him just because they’re intrigued. They want to get closer to discover what makes him tick.

The Search For The Unconventional Partner

The eccentric Aquarius needs a partner who keeps him on his toes. Therefore, his lovers are often more peculiar than he is. He’s not above going through several relationships to find the perfect person.

He is not one of those people who only feel complete when paired up with a romantic equal, though. He is fiercely independent and can easily separate love and lust. Because he is so busy figuring himself out, he might not devote himself to a partner as much as he should. Therefore, he may break a lot of hearts before he finds a permanent lover.

If you’re trying to win his heart, you might notice that he seems detached. You can have a great time together and share some intimate moments only to have him act cold the next time he sees you. This can be frustrating and explains why the Aquarian is often single.

Do you love an Aquarius man? Become his friend first if you want a long-term relationship. He’s notoriously afraid of commitment, but he’s loyal to the people who match his wit, genius and weirdness.

Goofing off with him will pull him into your wheelhouse. You might spend hours talking about politics or the boundaries of the universe. Don’t be afraid to let your freak flag fly around him, and he might notice that you’re romantic material after you have become close friends.

He’s charming in general, but he doesn’t exactly know how to be suave and seductive. If he’s into someone, he has trouble expressing how he feels. He will certainly not communicate his emotions excessively.

If you’re an Aquarius man, another Aquarius is probably the best love match for you. This zodiac sign understands your need to express yourself but gets the fact that you don’t talk about your feelings. An Aquarius partner has an equal need for independence and will match your exploratory nature in the bedroom.

How To Attract The Aquarius Man

If you’re hoping to be friends or lovers with an Aquarius man, you have to show him that you’re different than everyone else. Do you stand out from your group of friends or always feel like you’re on the outskirts of the norm? Then you have a good chance of getting this guy to notice you.

The more original you are, the more an Aquarius man will enjoy your company. Don’t be afraid to make your uniqueness known even if other people think you’re weird when you admit certain things about yourself. The Aquarius man will appreciate it.

Whatever you do, don’t be emotional or needy right off the bat. The Aquarius man won’t understand.

He values his independence more than anything. He’s glad to devote himself to you if he decides that it’s what he wants. You can’t force him to do anything that he doesn’t want to do.

Therefore, give him lots of personal and emotional freedom. You don’t need to spend too much time with an Aquarius. He would prefer that you do your own thing. You’ll get together when you can both make it work.

Attract the Aquarius man by catering to his intellect. Talk about poetry, film, politics and current events. He’ll be impressed by your knowledge, especially if you have an unusual opinion about something. He could banter about that for hours. He appreciates people who can reach him on a high intellectual level.

What To Expect From A Physical Relationship

You’ve learned that the Aquarius man connects with people on a mental level. What does that mean if you’re romantically involved? What is sex like with this guy?

This fellow can be unpredictable in bed. He has a powerful libido but doesn’t place a lot of importance on physical relationships. Sometimes, it seems as though he can take or leave sex.

He requires a lot of alone time. If he believes that it’s in his best interest to stay solo for a while and pay attention to his pursuits, he might not express any interest in a relationship. Most of the time, though, he has a large sexual appetite. He may be involved with more than one sexual partner at once.

He’s open to exploring boundaries and experimenting with different positions. This man isn’t aggressive or insistent. Sometimes, he prefers that someone else take the lead because he’s so willing to try something new.

Therefore, make sure that you’re not a follower when it comes to sex. Being playful and initiating a romp in the hay is always appreciated.

Nothing is taboo for this guy, and he doesn’t like being made to feel different because of his preferences. In other words, he can get pretty kinky.

He may be hesitant to share his fantasies with other people. He thrives when someone else can listen to his ideas and take them to the next level. If you’re not ready for unconventional sex, you might not want to get involved in a physical relationship with him.

What Is It Like To Live With An Aquarius Man?

Sharing space with an Aquarius man can drive some people crazy. He’s likely to use the kitchen table for projects and eat in bed. He’s not very practical and tends to fill his space with the objects of his latest obsessions. He might cover the coffee table with his comic books or display random treasures on the mantle.

If that annoys you, give him his own space. A man cave would be ideal for this guy. Transform the guest bedroom into a creative space for him so that he doesn’t encroach on the other parts of your house with his idiosyncratic collections.

Should The Aquarius Man Have Children?

This fellow can be a wonderful role model for children. He is proof that you don’t have to stick with tradition to be successful. He will encourage his kids to be unique and support their creativity.

The Aquarius father is the perfect guy to console teenagers who feel out of place at school. He can draw from his own experience to dole out wisdom and make his kids feel completely loved no matter who they are.

He can be distracted around his family, though. The kids can get frustrated while trying to get an Aquarius dad’s attention. He is likely to be doting when helping his kids with their homework or coming up with a grand idea to build a treehouse in the backyard. He tells lots of stories and encourages his kids to use their imaginations.

This father enjoys spending time with his kids, but he needs to distance himself sometimes. He probably won’t spend the entire weekend doing family things. He’ll need to retreat to his own space to clear his mind and reconnect with himself periodically.

One thing that this man will instill in his children is a sense of independence. He is most proud when his kids demonstrate that they’re not afraid to be their own people.

What Career Is Best For An Aquarius Guy?

If you’re an Aquarius man, you should probably stay away from boring, conventional jobs. You can’t do data entry for hours. Analyzing numbers is not your thing. You’re a genius, and you need to use your brainpower for the greater good of the world.

You flourish in creative positions. In a perfect world, you would create your own job description to fill the particular need of a company. You’re flexible and innovative, and you have versatile talents.

You could be happy as a scientist or activist. You would also make a great art or acting teacher. If you were a college professor, you might teach a class that compares classical music to the Beatles’ songs or discusses the practicality of virtual reality.

Even though you’re individualistic, you’re not above bringing people together to achieve a common objective. You would be an asset to a non-profit organization or forward-thinking corporation.

What Are The Strengths And Weaknesses Of The Aquarius Man?

Although this guy doesn’t have the arrogant self-assurance of a Leo or Aries, he is not insecure. He knows that he’s different than most people, and he wouldn’t have it any other way. His biggest strength is his self-confident. It doesn’t matter how bizarre he is; he is proud of his individuality and tries hard to break the mold any chance he gets.

We need these kinds of people in the world. They’re the ones who explore boundaries and bring acceptance to individuals who might feel ostracized because of their differences.

An Aquarius man’s greatest weakness is his sense of detachment. He’s not a great communicator, and he’s so comfortable with himself that he doesn’t need strong friendships to feel satisfied with life. Therefore, he can get stuck in his head and fail to connect with other people.

If this describes you, you might want to learn more about emotions from an intellectual perspective. Reading psychology books can help you understand where people are coming from even if you don’t empathize. Learning about the mind may also make you a better communicator.