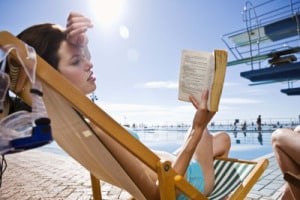 One of the things we like to do here at Science of Relationships is to let you know when we see relationship “mis-information” being pushed out there in media-land. Here’s a good one!

Recently, a major national newspaper contacted us for our views on an op-ed piece written by Kimberly Sayer-Giles, who recently was named one of the top 20 “Advice Gurus” by Good Morning America (ABC News).

The article, Romance Novels Can Be As Addictive As Pornography, makes some profound claims and got a few of us lusting to answer back! Here’s an excerpt.

“According to psychologist Dr. Juli Slattery, author of ‘Finding the Hero in your Husband’, there are similarities between what happens to a man when he views pornography and what happens to a woman when she reads a romance novel.

Men are very visual, and viewing pornography produces a euphoric drug in the body. This drug is the reason pornography becomes addictive. When the natural high wears off, a man will crash and feel depressed (as happens with any drug) and crave another hit.

Women are more stimulated by romance than sex, so when they read romantic stories (and they don’t have to be explicit to work) they can experience the same addicting chemical release as men do.

For many women, these romance novels may be more than a necessity; they may be an addiction — and Slattery said she is seeing more and more women who are clinically addicted to romantic books.”

The article by Sayer-Giles goes on to make suggestions about how to fight the “addiction.”

First of all, we have found no research that suggests that romance novels are “clinically addictive” as implied by this article. In fact, even the existence of pornography addiction or sex addiction is controversial among researchers and clinicians. Although many would agree that sexual behavior can sometimes be impulsive, compulsive, and problematic, there is no agreement on what constitutes out of control sexual behavior.1

There has been a recent trend in the media to assign the term addiction to a wide range of behaviors. One of the most notable is sexual behavior. Media scandals such as those involving Tiger Woods and Jesse James have made the term “sexual addiction” commonplace and imply that it is a validated psychiatric disorder. In fact, this is not a recognized psychiatric disorder and may have more to do with moral judgments and societal expectations of sexual behavior.2  For example, in the cases of Tiger Woods and Jesse James, they were labeled sex addicts after violating the rules of monogamy in their marriages. Had these men been single and canoodling with various women it is unlikely that the label of sex addict would have been applied.

Although there is no scientific evidence that people become addicted to romance novels, some research does indeed suggest that high levels of romance reading can potentially influence real life attitudes and beliefs or relationship satisfaction.3 In one study, reading romance novels was associated with negative attitudes towards condoms and less intent to use condoms in the future.4 This is attributed to the romance script promoting true love as being “swept away” without consideration for safer sex, and portraying women as passive. This same research provides evidence that including messages about safer sex in romance novels can increase positive attitudes and intentions to use condoms, again demonstrating the ability of pop culture to influence our relationships.

So, while media effects are real and some heavy consumers may indeed have their beliefs influenced by their taste for romance fiction, the claim that women can become “addicted” to the reading is thoroughly unsubstantiated. As discussed in a previous post, just because something is pleasurable (and releases pleasure chemicals in the brain) does not neccessarily mean it is addictive5— despite what any “Guru” might claim.

Note: This piece was written collaboratively by Amy Muise and Dr. Bjarne Holmes.