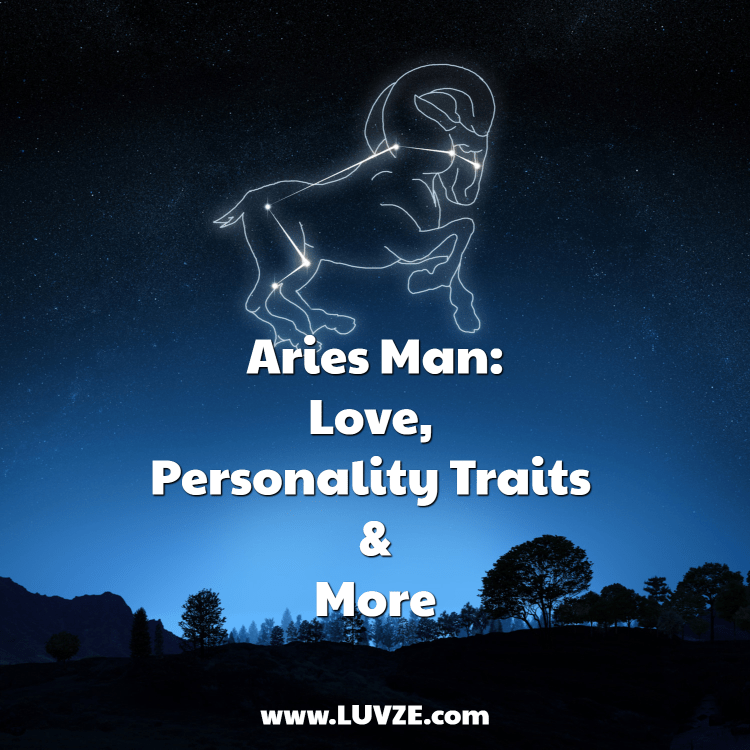 Aries is the first sign of the zodiac. Therefore, it should not be surprising that the Aries man always has to come first. He doesn’t command attention unwittingly; most people give it to him because he’s that enthralling.

His allure doesn’t come from the fact that he’s especially interesting or mysterious. It’s just a result of his strong personality. He’s energetic, persuasive and compelling, and his dynamism rubs off on you and makes you want to be around him.

The Aries zodiac is symbolized by the ram, and this man reflects stoicism, stubbornness and determination. The ram also signifies that this guy is not afraid to take life by the horns.

Is It Narcissism Or Self-Assurance?

The Aries man has a very accurate opinion of himself. He’s a fellow with many talents, and he isn’t going to self-deprecate in order to make bring himself to someone else’s level. You might say that he has a healthy self-confidence.

Whereas he is definitely egotistical, he isn’t selfish. He simply recognizes that he’s pretty great.

This quality makes him extremely authentic. He has no reason to lie about who he is. Therefore, he’s not likely to.

If he is dating several other people when you meet him and ask him on a date, he’ll probably reveal that too. He’s not afraid to tell you exactly what he wants even if he knows that you don’t want to hear it. His arrogance is tied to his deep and honest knowledge about himself. That makes him even more attractive.

It also makes him trustworthy. This guy is not going to hide things from you because he doesn’t really believe that he does anything wrong. Therefore, he is an open book, and you should be able to put your faith in him.

One thing that you should never do is lie to an Aries man. He will see right through you. Moreover, he will call you out, and you’ll feel awkward, to say the least.

Why Is He So Attractive?

The Aries man is alluring in every way. He may be traditionally handsome. Even if he’s not, he knows that beauty is in the eye of the beholder. Because he believes in his own appeal, he exudes charisma. This makes him insanely charming.

Others may not even realize why they’re magnetized by the man. They’re simply captivated by his charm, confidence and influence.

There Is Vulnerability Beneath It All

All of this swagger can cover up this bloke’s insecurities. He can laugh anything off and doesn’t tend to hold onto negative feelings. However, he is more sensitive than most people expect.

His macho show is just a veil for his vulnerability. He doesn’t like to expose his weaknesses, so he doesn’t. But that doesn’t mean that he is not human.

In fact, the Aries man can be fairly jealous. This quality represents his insecurity.  When he’s feeling doubtful, he’s likely to turn it around on his loved ones. He may lash out, acting possessive in response to his sensitivity.

He hates losing, especially if that means losing the people that he loves most in his life. If you’re friends with an Aries, make sure that you show them how much you care about them so that you can soothe their self-doubt.

Is It Assertiveness Or Aggression?

The Aries man’s forceful nature can come across as aggressive. People who know him well understand that he’s not hostile or antagonistic. He runs off of love even if that love is often self-directed.

Honestly, the Aries man is more stubborn than anything. He is full of pride and quite competitive. Therefore, he’ll often position himself in opposition to you, but he isn’t trying to be argumentative. He’s just trying to figure out who is the alpha. It’s usually him.

The Aries Lover Needs A Lot Of Stimulation

How can you deal with an Aries in a romantic partnership? Stroke his ego—or anything that you can find, for that matter. He’s sensual and appreciates displays of affection that are directed toward him.

He’s also adventurous in bed. There is almost nothing that he won’t try. He needs someone who can keep up with his strong libido, but he enjoys being the teacher. As long his partner is willing to be playful and let him lead, he will guide them.

With that being said, the Aries won’t tolerate a boring significant other. If you’re involved with an Aries man, you should be able to take his direction and give him attention without losing yourself. He’s turned on by his lovers’ power, not their neediness.

If you play games, you might lose him. He works well with partners who are as honest as he is and can fire back their own bluntness in response to his. Be clear about what you want, and he will respect you.

How Can You Get His Attention?

The best way to get the attention of an Aries man is to be yourself. If you happen to be a wallflower, you might want to look for someone a little more shy and sensitive. You’re probably not going to capture the Aries chap’s interest.

Be open to chatting and flirting. The Aries is receptive to talking to anyone, so give yourself the chance to make a strong first impression. If you do, the guy will do a lot to get and hold your attention.

He’ll “accidentally” run into you, flirt in public and tell you exactly how he feels. If he really likes you, he might try to push your buttons. That’s only because he wants to make sure that he has an effect on you.

How Can You Keep An Aries Man?

The downside to dating an Aries is that he can be fickle. He is quick to fall in love, and he will become obsessed with the object of his desire. He will be completely loyal. And then he might move on.

One major turn-off is the cold shoulder. If you decide that you don’t want to play into his needy ego and ignore him for too long, he’s happy to find someone who will give him what he wants.

To encourage your Aries partner to stick around, don’t fall prey to routine. Keep things interesting by surprising him with random acts of passion, and make sure that you’re spontaneous. He moves fast, and you’ll need to be able to keep up with him.

If you’re exhausted from the whirlwind romance, give him some space. He would rather go off and do his own thing than drag around dead weight.

Resist the temptation to trap him in the relationship. Trust that if he’s into you, he won’t stray. The Aries man isn’t a cheater. If he truly loves you, he’ll be as devoted as a dog.

The Aries Dad Is Fun And Caring

Having children brings out the childlike spirit in the Aries man. Although he has an intense personality, he’s not really that serious. When he becomes a dad, he remembers how free-wheeling and spontaneous kids can be. He loves to nurture that in his own children.

This is the kind of guy who will toss his kids into the air to hear them squeal. He loves spending time with them, chasing them around and making them laugh.

As the kids get older, though, they might be surprised by how protective their father becomes. He has trouble letting his children explore their independence and may become controlling. It’s possible that he’s afraid of losing his status as the authority figure in their lives.

If he can hold onto his propensity for honesty, he will learn that his kids will open up to him a lot more when he speaks openly to them rather than yelling or making outrageous demands.

There Is No Middle Of The Road For An Aries Man

This guy lives on the edge. He lives in an extreme way. He creates balance in his life by experiencing one polarity or the other, not by floating down the center line.

His ambition is huge; if he sees something that he wants, he makes a beeline for it. This allows him to succeed in his career, but it can make him burn bridges if he doesn’t care about who he hurts in the process.

Still, his “me first” attitude makes him a natural leader. His urgency makes him an asset to any business. This guy is not lazy, and he will plow ahead to be a pioneer.

If he doesn’t reach the finish line right away, though, the Aries man might peter out. His extreme nature doesn’t give him a lot of endurance. He needs some encouragement to finish what he started if things start to slow down or take too long. He could stand to improve his patience.

What Makes The Aries Guy Great?

If you ask him, everything makes the Aries male a catch in life and in love. From an outsider’s perspective, however, these are the personality traits that most people appreciate about the Aries guy:

What Should The Aries Man Work On?

The same qualities that are a boon to the Aries guy can be his downfall. This guy should make sure that he takes responsibility seriously. He can be free-spirited and youthful, but he can also be naïve and reckless. He isn’t a child; he should hold himself accountable for his actions.

He loves to be noticed so much that he may struggle to find the perfect romantic partner. He is easily swayed by a dynamic personality and a pretty face, and flirting makes him feel even more attractive. His competitiveness can make him want to conquer a woman even if he’s not that into her. He could stand to slow down and consider how a partnership can benefit him in the long run.

Being around people with whom he is compatible is important. If he doesn’t hang out with his buddies enough, he might feel like he’s losing his edge. The Aries man feels grounded after a weekend with friends. He can be free to get competitive without worrying about offending them, and they always give him a pat on the back when he needs it. He also gets a chance to show off his success stories.

Doing the “bro” thing allows this man to show off his masculinity when his manliness is getting too much for the women in his life to bear. It can even bring out his sensitive side. He may be afraid to look weak in front of his spouse or girlfriend, but the Aries man will open up to his guy friends, and he could use a little more compassion.