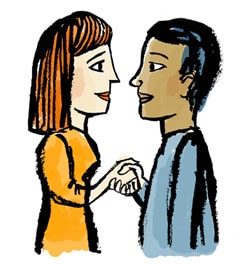 Cornina asked: “Is it realistic to believe that a man and a woman can move past the awkward barrier of good friends into passionate, romantic love?”

The answer is yes, friends can (and often do) become lovers, although as your question implies, the transition can be somewhat awkward.

Interestingly, research has found that romantic relationships do not necessarily differ from close friendships in terms of emotional connection/intimacy, shared activities, or even sex1 (hence the term “friends with benefits”). In fact, some researchers have said that the only difference between a friendship and a romantic relationship is the label. So if you’re starting from a friendship, you’re not far off.

Uncertainty is the main problem. People are often uncomfortable if they cannot predict others’ behavior and unpredictablity is common in the beginning stages of a romantic relationship.2 Norms and expectations change as you transition from friends to more than friends, and opposite-sex quasi-romantic friends often avoid talking about the status of their relationship and what they expect from each other.3

As for what facilitates the transition, your social network can play a big role. Hanging out in a group with friends can take the pressure off “dating” and help potential lovers feel more comfortable. In fact, if a girl wants to keep a guy in the “friend zone,” she may actively avoid spending time with his friends and family, as well as keep him separate from her own social network.3

People also use “secret tests”4 to figure out if a friend has romantic feelings without exposing their true thoughts. If you want to test the waters with a friend you have a crush on, you might try: a) asking a mutual friend (third-party) to find out if the “friend” actually does have romantic feelings (sort of the adult version of sending a note that says “do you like me? yes or no”), b) seeing if the “friend” gets jealous or upset at the sight of you flirting with another person or the thought of you in a relationship with someone else, c) joking or playfully suggesting that there might be a romantic spark between you, or d) spending time apart to see if the “friend” expresses loneliness or misses you. People rarely go so far as to ask a person flat out if he/she has feelings for them, and we currently do not have any research on which “secret tests” are more effective or whether they work better/worse than asking the person directly.

Most of the information on this topic has been summarized nicely in a recent book chapter.5 It is also worth noting that since your question was phrased in a heteronormative way, the research summarized in this article reflects that which is true for male/female pairs. However much is known about heterosexual relationship formation based on friendship, less is known about how homosexual friend pairs become romantic. This would be another area ripe for empirical analysis.

Dr. Dylan Selterman – Science of Relationships articles | Website/CV
Dr. Selterman’s research focuses on secure vs. insecure personality in relationships. He studies how people dream about their partners (and alternatives), and how dreams influence behavior. In addition, Dr. Selterman studies secure base support in couples, jealousy, morality, and autobiographical memory.