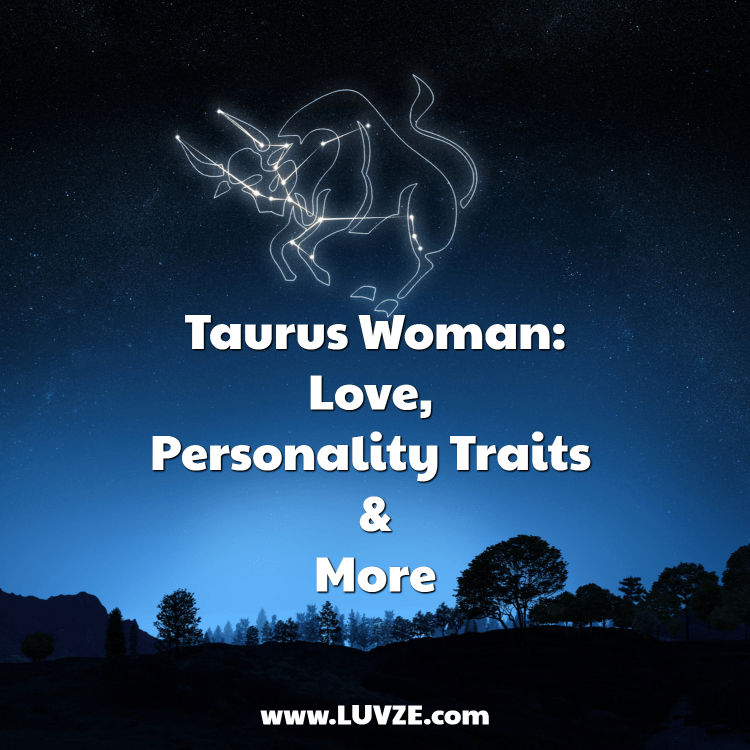 The Taurus woman, born between April 20th and May 20th under the Zodiac sign of the Bull, is determined and down-to-earth. You’ve probably heard the stories that Taurus females are stubborn and tend to anger easily.

With an animal sign like the Bull hanging over your head (literally), you’d probably be a bit bull-headed too. However, Taureans are not as quick to anger as most think. They’re more likely to walk away from conflict than insight it.

Don’t let that convince you they’ll be easy on you if you pick a fight, though. If you make a Taurus woman angry, you will get the horns.

Taurus Women Have a Stubborn Streak

When it comes to positive and negative characteristics of Taureans, stubbornness can be considered both. A stubborn Taurus woman exudes confidence and determination, while at the same time expressing a desire always to win and never take “no” for an answer.

Taurus women aren’t quick to lose their temper, but when they do, the likely culprit is an elevated stress level. If she gets to that breaking point, it’s best to back away. Her response is guaranteed to be quite intense and might result in more than just hurt feelings.

While confidence and determination are considered positive personality traits, when coupled with the Taurus sign, they can come off as more negative. Taurus women tend to stick to their guns and won’t budge on their views unless they are given a very good reason. If you find that reason, make sure you deliver it strategically to avoid an unpleasant reaction.

The Taurus Woman is Earth-Centered

Taurus is an earth sign, and its effects on a woman born under it are profound. Taurus is also ruled by Venus, the Goddess of Love, making her a strong, yet sensual woman. Taurus women are earth-centered and prefer order vs. chaos, routine vs. spontaneity, and honesty vs. secrets. They are grounded and don’t react well to those who are flighty or “living in the clouds.”

The Taurus woman prefers to stick to her routines and isn’t impressed by the adventurous life. Change can be threatening to her, but she learns and adapts quickly when it happens. If she makes a mistake, she owns up to it and seldom makes the same mistake twice.

A Taurus woman is greatly affected by her personal environment as well as the natural world. She wants her home to be comfortable and cozy. You’ll find lots of wood and natural elements present in her furnishings, flooring, and knick-knacks.

She may collect rocks and crystals, interesting pieces of driftwood and other natural found objects. She may also maintain an extensive garden or herbarium as she loves to cultivate and watch things grow.

Taureans prefer the natural world to the modern one. They are most comfortable when they can see outside, so lots of big windows are favored when choosing a home.

A yard backing up to a forested area or one that is dotted with old-growth trees is also a plus. Taurus women tend to become anxious and more easily stressed when they don’t have a natural place to call home or even just visit from time to time, so most avoid big city living if they can.

A Taurus Woman’s Career is More Than Just a Job

Taurus women may be infamously known for their stubborn and tenacious personalities. However, when it comes to their careers, those qualities are quite helpful. Taureans are independent by nature, and that trait shines through in their work.

They are highly intelligent women who know how to use their brains, analyze data, and form educated opinions. What some call stubbornness is also a form of intelligence that is not often realized.

A Taurus woman gets things done on her own and isn’t afraid to take on new projects on the job. She prides herself on her ability to multitask and stay on target when it comes to deadlines and details. When she sees something she wants, such as a promotion, she’ll work hard to achieve that goal and finish what she started.

However, she does prefer to work alone rather than in teams. She can certainly lead when called upon, but she’s introverted enough to allow someone else to take on that role with little hesitation. She lives by her schedule and enjoys time alone after big meetings or work-related events to recharge.

Because of their attention to detail and determination, Taurus women are ideally suited for banking, stock brokerage, insurance, accounting, and real estate positions. However, they are also nurturing individuals who make excellent teachers, chefs, doctors, and caregivers.

Whatever career she settles on, rest assured that the Taurus female will excel. Once she’s found the right fit, she’ll stick around for the long haul.

Although the Taurus sign is often associated with independence and strong will, these women are also known for their caring nature. They make excellent, yet strict mothers, who provide solid foundations for their children as they grow.

A Taurus mom loves her children unconditionally and will do anything to protect them. However, she recognizes that children need to experience both joy and heartache in their lives as they grow to adulthood. As a result, she knows when to step back and let her children solve their own problems and when to step in and make the save.

The Taurus mom expects obedience and good behavior from her children. She doesn’t mind an inquisitive child, as long as questions are presented respectfully. She won’t tolerate laziness either, so they learn to help out around the house as she did when she was younger. Despite her tough nature, she will be their best friend and happily teach them how to be strong and resilient regardless of what life throws at them.

Is a Taurus Woman Hard to Love?

A Taurus woman may appear calm and collected, but underneath that facade is a powerful, sensual woman who yearns to be loved and treated like royalty. When you first start dating a Taurean, you may feel as though she is hiding her true self from you, but she’s just testing the waters.

The Bull within demands that she does not commit until she is certain she’s made the right choice. As a result, she won’t truly open up until she feels confident in the longevity of your relationship.

Taurus is loyal to a fault and will love and treat you well as long as you return the affection. Be warned, though; she may exhibit jealousy from time to time, especially if provoked (remember that stubborn streak?)

She is generous with her partner, and although some see her as self-absorbed, she often puts the needs of someone she loves above her own. She doesn’t need excitement in her love life, although she enjoys the occasional romantic gift from time to time. Instead, she prefers a relationship that speaks of consistency and comfort.

If you’re trying to get a Taurus woman’s attention, keep in mind that she’s an expert at analyzing potential new partners. She’s a great listener but doesn’t offer up much about herself initially. However, the more you talk, the more she’ll relax. Don’t expect her to spill her guts to you like other signs tend to do. If you push her to do so, she’ll withdraw.

Taurus women are often seen as “the real thing” because of their solid, genuine nature. They aren’t overly needy, so if you’re looking for someone who’s a bit softer on the inside, Taurus is not for you. She’s strong-minded, but also enjoys being feminine. She’ll make a devoted and supportive partner for the person who opens up to her without reservation.

Are You Compatible with Taurus?

Taurus is usually compatible with Virgo and Capricorn, who are also earth signs, as well as Scorpio, Libra, Cancer, and Pisces. Virgo and Capricorn share many traits in common with Taurus, but if communication isn’t clear from the beginning, conflict will reign.

A Virgo mate is down-to-earth and generally calm, but tends to be a perfectionist, which the Taurus woman may find annoying. A Capricorn lover can be cold and detached, which might also cause Taurus to pull away.

On the exact opposite side of the Zodiac, we find Scorpio, who is passionate to a fault when it comes to relationships. Taurus and Scorpio make excellent lovers, but they can both be highly possessive. Arguments between these two signs can get very intense. If they work out their differences outside the bedroom, the relationship has the potential to be strong and lasting.

Libra is a gentle soul and makes an excellent match for the Taurus woman. This pair has much in common and gets along in everyday life and the bedroom. Libras can be a bit messy at times, but Taurus women typically don’t mind a little clutter if it means a lasting relationship.

Cancer has a great deal in common with Taurus, but both can be slow to open up. Consequently, the relationship takes longer to develop than most. Pisces, on the other hand, tends to draw Taurus out of her shell fairly quickly. This makes for a highly compatible, though surprising, match.

The Taurus Woman is Strong and Loyal

Taurus is an emotionally powerful woman who deals with stress better than most. However, she also tends to hide her feelings from others, preferring to appear strong and unaffected by stressful situations. This can be both a positive and negative trait for this willful female. Some of Taurus’ other common characteristics are summarized below.

The Taurus woman is:

However, she can also be:

Taurus is a sophisticated and often complicated sign to decipher. Her taste for art, music, and food is unparalleled. As a sensual woman, this ability to walk through the natural world with heightened senses of sight, smell, taste, and touch is not surprising. A Taurus woman cares deeply for her partner and family.

Despite her innate need for order and limited chaos in the home, she would do anything to keep her family safe and happy. This unwavering love is evident in everything she does, from her strong and steady work ethic to her money management skills. Even her stubborn determination lends itself well to her love of life and family.

Most important is the Taurus woman’s sense of loyalty and ability to follow-through with whatever her goals may be. If she sets her mind to something, you can rest assured she will accomplish her mission. Unfortunately, that can also make convincing her otherwise a bit difficult, but in the end, you’ll appreciate her more for her tenacity and commitment to you and your family.