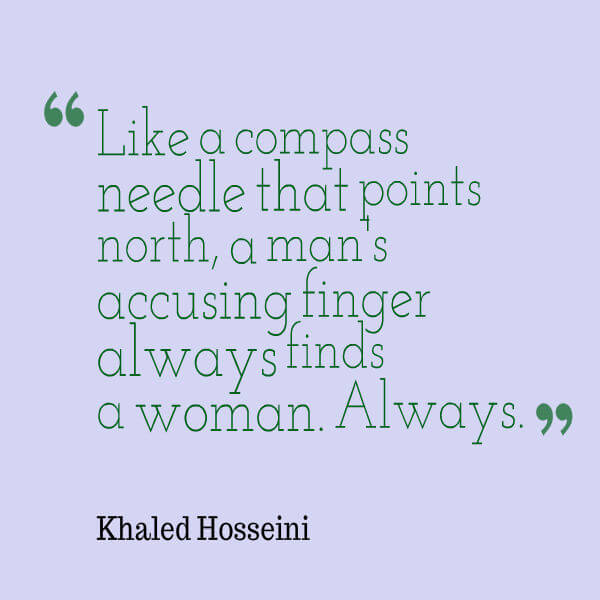 I realize that there are many areas where men have it harder than women. For instance, they are ridiculed when they claim they are abused by a woman. But the term ‘It’s a man’s world’ didn’t just pop up from nowhere.

It’s important for guys to understand that women really do struggle with many things in life because of their gender.

In the following video, that approaches the topic of how women have it harder than men (among other things), you can see how some people, including women, have a clearer picture of what is going on to them than people who have it easier and are not aware of the issues that some of us have to face.

So, why do women think they have it harder than men? Following are some reasons I can think of off the top of my head.

1. Men Think Women Don’t Get It

This blog is written by a woman, and I get a lot of heat for that. I’ve actually had guys compliment my articles and then find out that I am a woman and say, “Oh, you are a woman! Well, that changes everything!”

For example, I had one guy saying the following on an article about self-esteem –  something that isn’t necessarily a gender topic:

Ah. Did not realize that you were a woman. Makes me question the validity of the blog. Although I admit that I already read good stuff from women, so who knows.

I write on the topic of attracting women because:

I may not speak for every woman, but I have some pretty good insight into women and how to attract them, yet many guys are more willing to listen to a guy on what women want than me. I’ve even seen advice from a man similar to my advice get praised while mine got put down.

As an experiment, I tried it on another website I owned. When guys thought I was a man, they were all over what I had to say. It was valid to them.

2. Women Are Still Expected To Be Traditional

We may be in the year 2015, but many people are still stuck somewhere in the early 1900’s. Values have been passed down from generation to generation, and that means that both men and women are holding values from a time when women were considered less than men in many ways.

These messages are taught from a young age. So many women are taught that they are supposed to get married, have children, then take care of those children. And men are taught a different story.

Since I was young, I was asked when I was going to get married and have children, and when I decided that I wasn’t having children, people looked at me like I was the devil.

Obviously there must be something wrong with me because I don’t want children! I’ve even had someone tell me that I’m not really a woman until I have kids.

Yet, when my husband says that he doesn’t want kids, his value around the situation is immediately accepted. In fact, he usually gets a pat on the back telling him how much easier life is going to be for him.

The bottom line is that women are still walking around with a HUGE label of what is right and what is wrong for a woman to do, and if they go against that label, they have to deal with the shame that others try to make them feel.

Worse, if they let the traditional label define them, then they can get stuck in a life that doesn’t make them happy. I know too many women who got married and had kids young and have lived to regret it.

3. Women Have To Look A Certain Way To Be Valued

Men can be fat and unattractive and still be respected for who they are. Women, on the other hand, are judged harder on their looks. And, if they don’t feel like they live up to the standard that society has set out for what a woman really is, then they are also hard on themselves. This is an everyday struggle on why women have it harder than men.

I see ugly and fat men putting down women who have the same traits they do. Do you not see the craziness in that? Women on TV, women on the street, women in the workplace, and every other woman out there is judged by how they look regardless of what they are doing or how well they are doing it.

It is so accepted to put women down for their looks, that you will see it every single day.

I’ve written about why women think they are fat when they are not actually fat, and it clearly lays out why women struggle with their looks and weight so much more than men do.

The bottom line is that women need to be perfect to be and feel really accepted.

4. Women Are Often Treated Like They Don’t, Couldn’t, or Shouldn’t Understand

I can’t tell you how many times I’ve been in the company of a man who thinks that I have some sort of inferior intelligence. Usually, this happens with older men in positions of power where you need to interact with them for a solution, such as a boss, doctor, or even a car mechanic.

For example, my husband was diagnosed with Multiple Sclerosis. When we went to see the doctor, I had a lot more questions than my husband. The doctor actually ignored me on occasion, so my husband had to ask the question for me. Moreover, the doctor answered my questions by looking at my husband. It was frustrating, to say the least, considering that it was a very hard time for me and my husband. Moreover, it made me feel like I was less than a person as the doctor considered the man beside me more capable of understanding and worthy to talk to than me.

Another example? We have a mechanic that my husband has to deal with. If I even try to talk to the guy, he won’t respond to my questions or concerns. I’m not talking about short answers, I’m talking about ignoring me completely. I guess he thinks it’s a waste of his time to even acknowledge me. But, my husband can ask the exact same questions and this guy will happily explain everything in detail.

5. Women Are Viewed As Weak And Irrational When They Are Angry Or Emotional

For instance, in one study where men and women were shown images that aroused positive or negative emotional reactions, women had activity in their anterior inusla cortex, which results in deep emotion experienced in their body. Men showed neural responses in the visual cortex, which caused them to shift the impact of emotion away from themselves. Source

Yet, men can yell, get angry, throw things around, and be aggressive, and it’s perfectly acceptable. But, if a woman gets upset, she is labeled as weak or out of control. Why?

Men can cry and it shows ‘how sad they really are’. But if a woman cry’s she is being a ‘typical woman’ or a crybaby. Why?

Unfortunately too many women hide their real emotions for fear of being judged, and when that happens, unhappiness and lack of fulfillment are the results.

And that’s another reason women think they have it harder than men – they are often left unfulfilled because they are not allowed to be who they really are.

6. Women Have To Fight For What They Want (And Then Get Judged For Fighting)

A lot of women feel like they have to fight for what they want. They have to compete in order to get the same job, same pay, and same recognition as a man. They feel this because, to a large extent, this is the way it has been and still is and so they know they need to show off their talents and qualifications in a big light.

Men have more support when it comes to making it big and more trust in their capabilities. This isn’t just a theory, it’s a fact. CNN says that women don’t have the support from high-ranking sponsors who can actively campaign for their advancement and that men are often given the important jobs that can advance their career, while women are given more of the human resources jobs that don’t push the towards the top. Source

Not only does that minimize what the woman is doing for her life, but it is an attack on her self-worth. Unfortunately, if she gets what she was fighting for, these labels still get put on her by many people and she has to keep fighting to maintain her value.

7. Women Are Labeled Different Than Men For Many Things

8. Being A Woman Is Supposed To Be Insulting

What’s one thing that keeps women in a negative light? The words used to describe women and how they are supposed to be insulting. 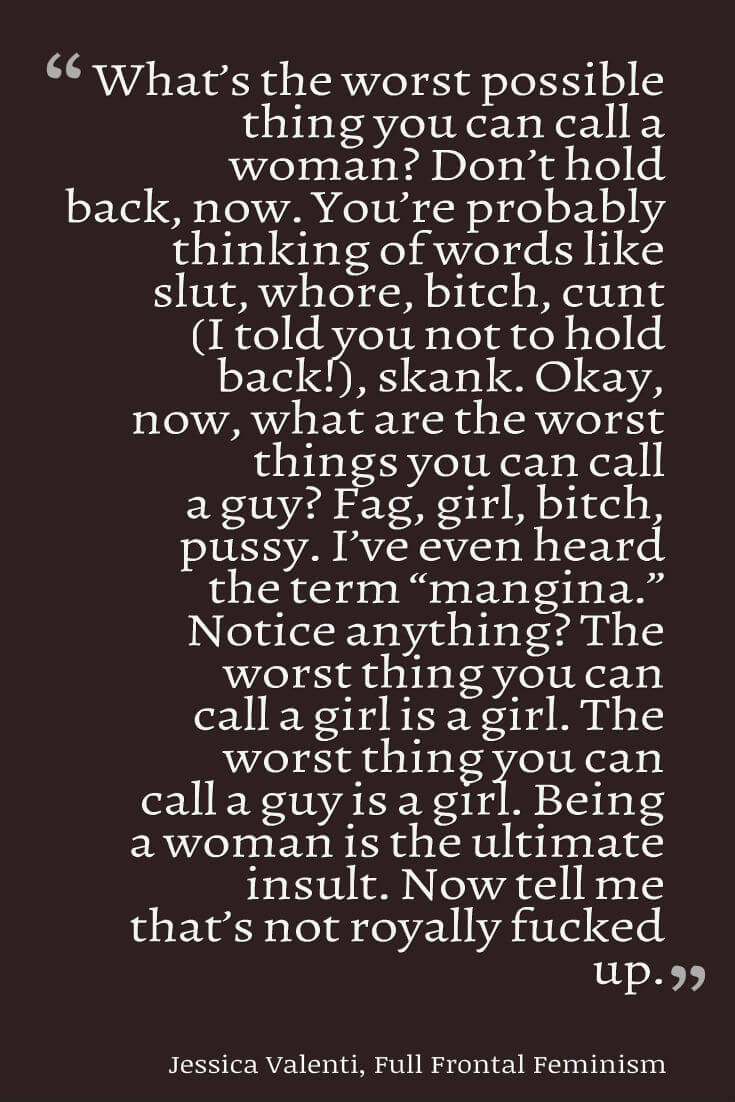 Need More Reasons Why Women Think They Have It Harder Than Men?

If you still can’t understand why women feel like they have it harder than men, then take some time to listen to them on a daily basis and try to see things from their point of view.

If you have women in your life, ask them why they think they have it harder than men. The above reasons were from experiences in my life, but I know that other women have different viewpoints of the struggles and obstacles they have found in their life. Take the time to get to know the women closest to you and open up a conversation about things that can make a difference.

Or, if you don’t have a lot of women in your life – or don’t want to open up that conversation with them about why they have it harder than men, then get online and listen to real women talking about their struggles or beliefs. Following is a Twitter feed on ‘women have it harder’ and there are constantly women and men updating it with opinions, articles, and insights. Get on Twitter and follow the feed for a while and get instant clarification into why women think they have it harder.

Tweets about women have it harder

Below is a list of research studies that are currently open for participation. … END_OF_DOCUMENT_TOKEN_TO_BE_REPLACED